Self-realized, well versed in scriptures, established in Brahman, master of Yoga, Pujya Sant Shri Asharamji Bapu has satiated not only India but the whole world with His nectarine discourses. Asumal was born on 17th April 1941 in Berani village of Sindh province before the partition of India. His father, Shri Thaumal Sirumalani was a leading person in the town; and His mother Mehengiba was a deeply religious and simple-hearted woman. Looking at the divine radiance on His countenance in childhood; His family preceptor had prophesied, “This child will become a great saint, and deliver many people.” The family preceptor’s prophesy has come true. Now all know it. The same Asumal, established in Brahman, is imparting spiritual knowledge through his teachings to philosophers, scientists, political leaders, officers, educated and uneducated male and female seekers of Truth; and giving the right direction to the perplexed human society wandering aimlessly in the jungle of life.

Bapuji had developed discrimination and dispassion of the highest level during his childhood and youth. So; he renounced home in His young age to wander restlessly yearning for God in deep forests. Then He found His Sadguru in Swami Shri Lilashahji in the forests of Nainital, India. He attained Self-Realization at the young age of 23. Then His Guru said, ‘From today the people will know you as ‘Sant Asharamji’; and whatever spiritual divinity you have achieved; distribute it among the masses.’

Obeying the command of His Guru, He renounced the blissful Samadhi and entered the public life to save the people engulfed by the conflagration of unrest and agitation by suffusing them with divine peace. Bapuji arrived at village Motera in 1972 located at the holy bank of River Sabarmati in Gujarat State, India. At that time it was a place of crimes; where some antisocial elements committed robbery and assault even during the day. The same Motera village has now become a sacred place of pilgrimage and the holy abode of peace for millions of devotees.

Not only Hindus but Muslims, Sikhs, Christians, Parsis and adherents of other religions have given Pujya Bapuji; who has given the dictum of ‘Welfare of all, well-wisher of all’; a place in their hearts; and they feel proud to be known as a disciple of Pujya Bapuji. Pujya Bapuji; an ardent supporter of India’s unity, integrity and peace; has dedicated His whole life to the welfare of the nation. 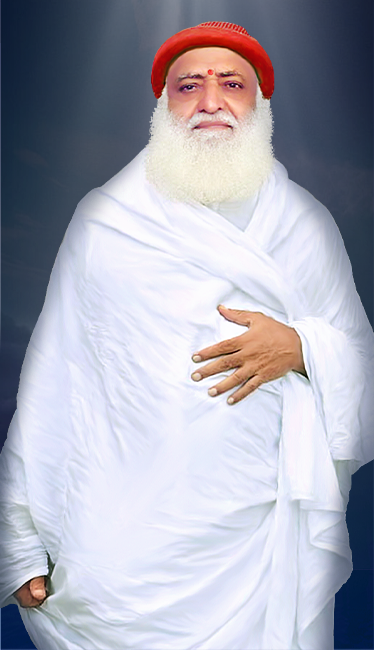 A Spiritual Revolutionist and an accomplished master of Kundalini Yoga

In Pujya Bapuji’s satsang we find a marvelous blend of the depth of meditation, the joy of Bhakti Yoga and the Knowledge of the Ultimate Truth of Jnana Yoga. In addition to that, Karma Yoga finds a perfect expression in His life. Human society is receiving benefits of the numerous acts of selfless service being carried out by over 425 ashrams, 1400 Shri Yoga Vedanta SevaSamitis and millions of sadhakas all over the world.

Spiritual, Moral and All Round Development Programmes

Satsang programmes of Pujya Bapuji and his chosen disciples are held in cities, towns and villages and in schools all over the country. Noble ideas, moral values, yogic kriyas and timeless secrets of health and rejuvenation are being disseminated through satsang. Innumerable people have been cured of incurable diseases.

Millions of men and women attend these camps conducted in Pujya Bapuji’s pious company, and awaken their latent powers through meditation and Kundalini Shaktipaata to get freedom from stress and passions. 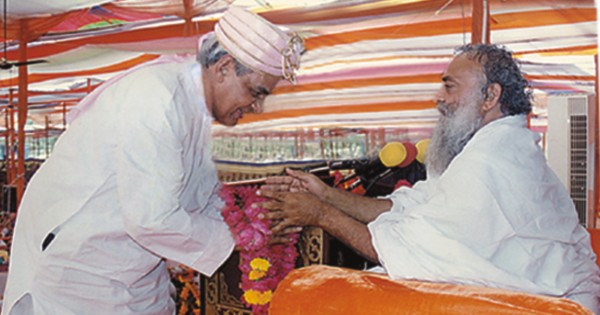 “Listeners, brothers and sisters, absorbed in the joy of devotion showered by Pujya Bapuji, “I have come here to pay my regards to Pujya Bapuji… to listen to His benedictory words… and not to deliver a lecture or babble as we usually do. One has to strive really hard in order to become blessed enough for attending the highly enlightening and ambrosial satsang of Pujya Bapuji. It was at Panipat that I had His darshana for the first time. That night on His way to the cottage after the satsang discourse, He called me. I myself was very keen to meet Him and receive His blessings. Only when some virtue is ready to bear fruit, are you blessed with the darshana and vicinity of saints and holy men.
“I do not have any account of having earned any virtue in this life; but it must be the result of some virtuous deeds of my previous life that I have earned this prized opportunity to meet Bapuji. Whatever He said on that day is still inscribed on my heart. It is indeed a great national duty to inculcate the virtuous samskÍras in the hearts of the common people by going around the nation. This verily is what has kept our nation still alive, and on the strength of which we can dream of a bright future… while mustering due strength and devotion towards seeing that dream of ours coming true.
“Pujya Bapuji is traversing the length and breadth of the country, blowing the conch of awakening, while advocating equal respect for all religions and inculcating good samskÍras in people, as well as teaching them how to discriminate between good and bad.
“We had committed the cardinal sin of almost forgetting our ancient heritage. Bapuji is making it visible to us once again by applying the collyrium of knowledge to our eyes. Bapuji opined that whatever is happening by the grace of the Almighty God, the sovereign power permeating every particle of the universe, ought to be studied in depth and investigated into, thoroughly.
“It should be our firm belief that God does not refuse prayers emanating from a pure heart. And if our prayer goes unanswered, rather than blaming the Lord, we should find out through introspection whether we really have the necessary purity within our own hearts. Politics, as such, can never bring forth that purity; though of course it may be instrumental in causing pollution.
“Pujya Bapuji recommended that one should take some time out from the routine life and attend satsang. When Pujya Bapuji was in Ujjain, I was extremely eager to go there…but as the adage says, ‘Every single grain of food is but earmarked for a particular individual.’ Similarly, there has to be an auspicious time when one can meet a Saint. Today I have been blessed with that ‘time’. This is my constituency. Pujya Bapuji has also instructed me on how to win in the elections.
“The country is passing through difficult times. Bapuji’s precepts have been a source of great strength. The recently concluded session of the parliament had left me a bit dejected. But after listening to Bapuji’s pious discourse at Lucknow last night, those clouds of dejection too have vanished. Bapuji has enunciated the three paths of knowledge, devotion and selfless action in addition to the purushÍrtha chatushtaya (the four goals of human life) for attaining the ultimate goal of human life, i.e. salvation and inner strength. Devotion requires self-surrender. There is no place for ego in the path of devotion. Knowledge may give rise to egotism, but in devotion there is total surrender. At the end of my 13-day rule I prayed, “O Lord! Whatever is mine is Tera, (literally it has two meanings – 13 and Yours’) Thine.” It is the magnanimity of Bapuji that He has made me – a listener, a speaker and elevated me onto the stage. Now it is also His responsibility to keep me at this level to which He has elevated me.
“Politics is a very slippery field. When a leader is down and out he does not admit his downfall, rather he gloats, “Har Har Gange” (‘Har Har Gange’ is a phrase uttered when one takes a holy dip in the Ganges, and here the leader means to say that he is making a graceful exit). I was overjoyed listening to Bapuji’s satsang. As a member of the Parliament, on behalf of myself and the people of Lucknow, I wish to offer my humble obeisances at the holy feet of Bapuji.
“May we always continue getting His blessings and taking courage and inspiration therefrom, keep treading the path of duty towards the attainment of Supreme glory – this is my humble prayer at the feet of God.” 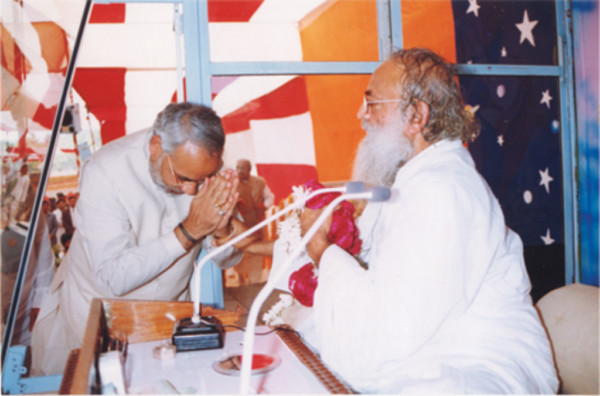 “Pujya Bapuji! You have been tirelessly engaged in the holy work of spreading our cultural heritage to virtually every nook and corner of India and the world. You are devoting each and every second of Your life to the work of human welfare perpetuated throughout the ages. May I and all the people walk in the light of the divine torch of cultural traits emanating from Your sacrifice. I am surviving only due to the blessings of saints. I have come here to get my license renewed. Just as a mongoose retires to its hole to smell special medicinal herbs when bitten by the snake and come back with renewed vigour to fight the snake, I too find the time to avail myself of such opportunities like this.”